Welcome to the NursingCAS Dispatch – a monthly newsletter intended to keep you up to date with current happenings at NursingCAS including:

Please visit the WebAdMIT Help Center for a summary of new features and enhancements available in Release 10:

Please contact Stephanie Wurth, AACN’s Director of Strategic Partnerships, at SWurth@aacnnursing.org if you have any questions.

In 2018, over 60,000 qualified applications were turned away from entry-level baccalaureate nursing programs. With continued growth in NursingCAS, we hope to enable schools to better market program offerings and open seats, allowing these seats to be ﬁlled by qualiﬁed applicants. 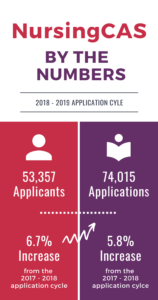 RSVP for the Luncheon/NursingCAS Roundtables at Baccalaureate Education Conference

Want to learn more or take a deeper dive on a specific topic as it relates to NursingCAS? This is your opportunity. Join your colleagues for a complimentary lunch on Friday, November 22, 2019 @ 12:45pm during the Baccalaureate Education Conference for a NursingCAS Roundtable Discussion session. This luncheon session has limited seating, so pre-registration is required. Complete the RSVP form by Tuesday, November 19th, 8am EST to save your space!

Roundtable discussions will be led by fellow nursing school colleagues who utilize NursingCAS as assistant deans, admission directors, and recruitment and advising directors. If you participate in admissions committees, chair a program, interview applicants, review applications, develop reports, or just want to learn more about NursingCAS, please join us!

Liaison International publishes a magazine every season dedicated to sharing their insights into the recruitment and admissions space—subscribe to The Admissionist and read the most recent Fall 2019 publication here. The article “Doing More with Less in Admissions and Enrollment” highlights efforts by different programs to rethink the way they recruit students, and the article “Three Reasons to Include Social Media in Your Admissions Outreach” discusses the value of a social media marketing program and reasons for admissions offices to develop one. In addition, this issue’s Highlights in Higher Ed article analyzes workload management in admissions offices at a time when application rates are declining and individual students applying to more schools in a given cycle. Check out the current and past issues for more articles on a range of topics and perspectives that can support a more holistic approach to admissions!

“The American Association of Colleges of Nursing (AACN) commends the U.S. House of Representatives for unanimously passing H.R. 728, the Title VIII Nursing Workforce Reauthorization Act of 2019. This overwhelming support represents an important step towards reauthorizing vital programs that bolster nursing education, prepare the next generation of nurses, and support communities across the country.”

“Vanderbilt University School of Nursing has received two awards totaling more than $5 million from the U.S. Health Resources and Services Administration (HRSA) to increase the number of nurse practitioners (NP) working in rural and underserved communities where there aren’t enough primary care providers.”

Health Care is on the Ballot in State Elections

“The races for governor this November in Kentucky, Mississippi, Louisiana, and Virginia haven’t attracted nearly as much attention as next spring’s presidential primaries, but they are hugely important to hundreds of thousands of voters without access to health care.”